Bradblog has the full story on the latest Sibel Edmonds news. Here is the intro: 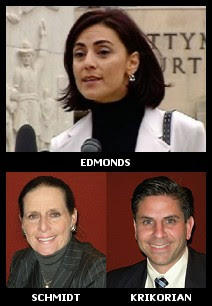 Unless the Dept. of Justice re-invokes their twice-invoked "state secrets privilege" claim in order to once again gag former FBI translator-turned-whistleblower Sibel Edmonds, her attorneys have notified the department by hand-delivered, sworn letter of declaration [PDF] this week, that she intends to give a public deposition, open to the media, in response to a subpoena this Saturday in Washington D.C..

Edmonds has confirmed her intentions to answer any questions asked of her during the sworn proceedings, fully and publicly, during conversations with The BRAD BLOG this week. She notes that her agreement with her former employer, the FBI --- who fired her illegally after she filed whistleblower allegations about corruption and foreign infiltration in the linguistics department --- includes certain non-disclosure requirements. However, those requirements do not preclude her answering to a legally issued court subpoena.

The subpoena and request for sworn deposition is part of a case now pending before the Ohio Elections Commission in which Ohio's Republican U.S. Congresswoman Jean Schmidt (R-2nd District) has filed a complaint against her 2008 independent challenger, David Krikorian who Schmidt has charged distributed false statements about her during last year's campaign.

The resulting testimony, if it indeed occurs this weekend, could be far more explosive than either Schmidt or Krikorian might have ever guessed...

Read the rest at BradBlog

Sibel's name came up in some of my recent reading. We don't know what will happen, everything she knows. There is speculation she became aware certain well-situated Americans were skimming money from the illegal international drug trade to funnel into clandestine projects with questionable agendas, like DUMB (deep underground military bases) and electromagnetic weapons.

I particularly liked this story by Harry Mason about weapons testing in Australia. Did this happen? Does it still? We heard nothing about it in the states. Video from 1997.

What he describes are part of a large body of science by Tesla unknown to most people, classified by our and other governments, including Tesla's primary energy device, a fundamental, enabling technology and what I've called the big news story of the next 10,000 years.

How interesting! I admit I'd missed that part of this story until now. Many people have lost their lives because they understood the importance of talking about all that. I pray that if it comes up in Sibel's comments, she never suffers—and the world finally enjoys the rapid, unimaginable technological bounce and the coming of the end of socioeconomic inequality it promises. Sic'em, Sibel.