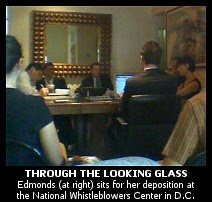 Brad is quasi-liveblogging the deposition here.

"Edmonds told me in a brief phone conversation during the break: "Bruce Fein is raising objections to everything", though that's to be expected. She said she's been asked, and has answered, questions on Dan Burton (R-IN), Dennis Hastert (R-IL), Stephen Solarz (D-NY), and other questions on those high-ranking officials and lobbyists in her "State Secrets Gallery"."

Another break...Edmonds still being questioned under direct. Fein believes his questioning cross-examination will last two hours or so once he begins. They are now breaking for lunch. DoJ/FBI still did not show up.

The deposition is being videotaped and Edmonds hopes that it can be released as soon as possible after the deposition, though there has been some objections about releasing the video tape...