I'll be on Scott Horton's radio show on Tuesday at 12.15pm Eastern for 45 minutes.

You can listen live here, and I'll try to get a copy of the program too.

I suspect we'll be talking about Sibel's case :-)

Former FBI translator and whistleblower Sibel Edmonds has promised to tell us everything she knows about treason at the highest level of the US government - with one proviso:

"Here's my promise to the American Public: If anyone of the major networks --- ABC, NBC, CBS, CNN, MSNBC, FOX --- promise to air the entire segment, without editing, I promise to tell them everything that I know."

Edmonds, "the most gagged person in the history of the United States of America," has been trying to expose criminal activity, treason, at the highest levels of the US Government - Congress, Pentagon and State Dept - since she became aware of the crimes in 2001 and 2002.

Edmonds has exhausted every conceivable channel in the courts, Congress, and elsewhere, and is now willing to risk criminal charges to ensure that the American people learn how their government really 'works.'

From BradBlog (in full, with permision)

EXCLUSIVE: FBI Whistleblower Sibel Edmonds Will Now Tell All - and Faces Charges if Necessary - to Any Major Television Network That Will Let Her

She's Prepared to Name Names, Including Those of Two 'Well-Known' Congress Members Involved in Criminal Corruption

The 'Most Gagged Person in U.S. History' Tells The BRAD BLOG She's Now Exhausted All Other Channels... 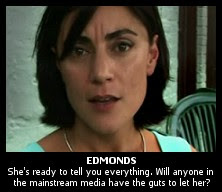 Attention CBS 60 Minutes: we've got a huge scoop for you. If you want it.

Remember the exclusive story you aired on Sibel Edmonds, originally on October 27th, 2002, when she was not allowed to tell you everything that she heard while serving as an FBI translator after 9/11 because she was gagged by the rarely-invoked "States Secret Privilege"? Well, she's still gagged. In fact, as the ACLU first described her, she's "the most gagged person in the history of the United States of America".

But if you'll sit down and talk with her for an unedited interview, she has told The BRAD BLOG, she will now tell you everything she knows.

Everything she hasn't been allowed to tell since 2002, about the criminal penetration of the FBI where she worked, and at the Departments of State and Defense; everything she heard concerning the corruption and illegal activities of several well-known members of Congress; everything she's aware of concerning information omitted and/or covered up in relation to 9/11. All of the information gleaned from her time listening to and translating wire-taps made prior to 9/11 at the FBI.

Here's a handy bullet-point list, as we ran it in March of 2006, for reference, of what she's now willing to tell you about.

"People say, 'why doesn't she just come forward and spill the beans?' I have gone all the way to the Supreme Court and was shut down, I went to Congress and now consider that shut down," she told The BRAD BLOG last week when spoke with her for comments in relation to our story on former House Speaker Dennis Hastert's original attempt to move a resolution through the U.S. House in 2000 declaring the 1915 massacre of 1.5 million ethnic Albanians in Turkey as "genocide".

"Here's my promise to the American Public: If anyone of the major networks -- ABC, NBC, CBS, CNN, MSNBC, FOX -- promise to air the entire segment, without editing, I promise to tell them everything that I know," about everything mentioned above, she told us.

"I can tell the American public exactly what it is, and what it is that they are covering up," she continued. "I'm not compromising ongoing investigations," Edmonds explained, because "they've all been shut down since."

I've renamed the blog "Against All Enemies" as per our recent discussion.

And I should have some new posts coming soon.